One of the biggest issues motorists have with converting to an electric car is the time it takes to recharge their batteries compared to driving into a filling station and refuelling with petrol and diesel.

But the latest zero-emission model to come out of China might just eradicate that with claims it can add 124 miles of range from a five-minute charging session.

It’s called the Xpeng G9 and is said to be the ‘fastest-charging mass-produced SUV on sale’. And it might soon be sold in Britain.

The fastest-charging electric SUV yet: This is the new Xpeng G9 – a battery-powered family car that when plugged in for as little as five minutes can add 124 miles of driving range

The G9 will be the first volume-production electric family car launched to the Chinese market to feature an 800V silicon carbide battery.

The use of silicon carbide in EV batteries boosts thermal conductivity by three times over that of standard silicon, meaning faster heat dissipation and therefore improved efficiency from smaller units.

This translates to both longer driving ranges and much faster charging speeds than what’s currently available from EVs on sale in Britain today.

The new SUV supports charging speeds of up to 480kW. This exceeds even the faster ultra-rapid devices in the UK right now, which offer up to 350kW. And that seems to be the case in China too…

Only Xpeng’s own network of supercharging stations are currently compatible with the G9’s full charging capacity. There are 300 available in China today, though it expects to have 2,000 of supercharging locations across the country by 2025.

Keep it plugged in for a quarter of an hour and it should be able to boost the battery from 10 to 80 per cent charge, the brand says.

And with the battery fully replenished to 100 per cent capacity, Xpeng’s range-topping G9 will be able to go for over 350 miles before needing to find another chargepoint. 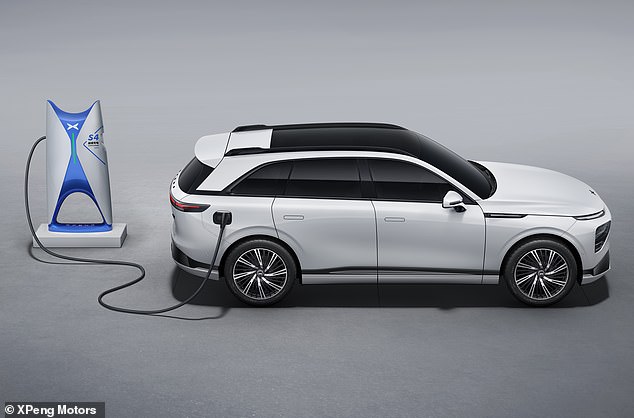 Keep it plugged in for a quarter of an hour and it should be able to boost the battery from 10 to 80 per cent charge, the brand says 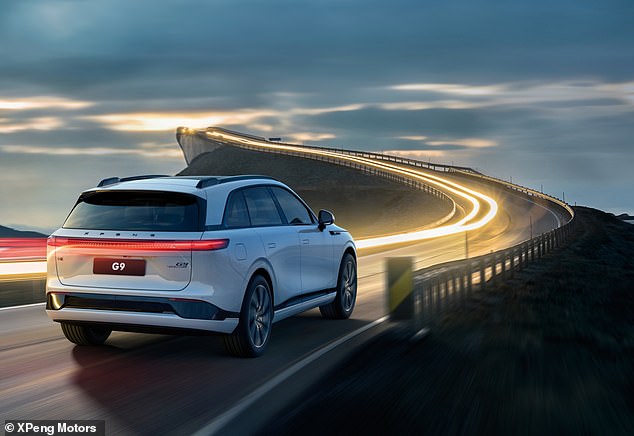 The super-quick charging times are thanks to its 800V silicon carbide battery, which is a first for any volume-production vehicle in China 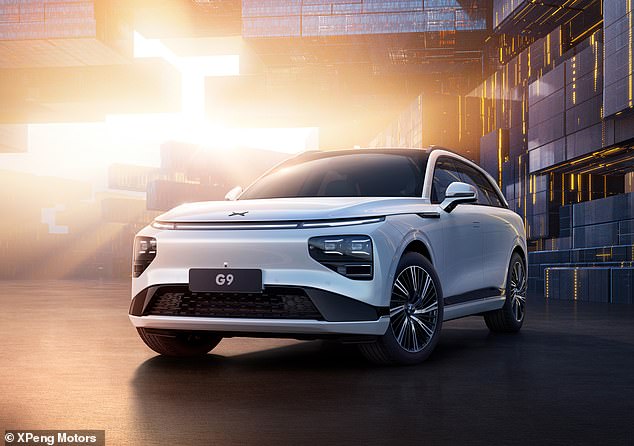 The SUV supports charging speeds of up to 480kW, which exceeds the highest available devices in the UK right now and are only matched by Xpeng’s own network of superchargers

Xpeng G9: Will it fit in my garage? 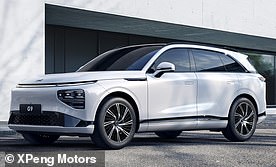 The car manufacturer quotes official ranges – using European test cycles – of between 286 and 354 miles, depending on which of six different powertrain options available to customers, which includes the choice of rear-wheel drive only with a single electric motor or a pair of motors, one at each axle, driving all four wheels.

Every variant will have a limited top speed of 124mph.

The most potent all-wheel drive model packs an impressive 543bhp and is capable of sprinting from a standstill to 62mph in less than four seconds. The 308bhp RWD versions take 6.4 seconds.

The SUV is also said to possess ‘powerful braking capabilities’ and can come to a complete stop from 62mph in 34.6 meters, which is only fractionally longer than the stopping distance of a Porsche 911.

Owners will have the choice of seven driving settings, one of them being ‘Boost’ mode that promises to deliver the drivetrain’s maximum torque within 0.15 seconds of the driver flooring the throttle pedal.

The SUV also boasts fully-adjustable air suspension, meaning it can be raised and lowered in ride height by 10cm, in case customers might want to venture off-road. 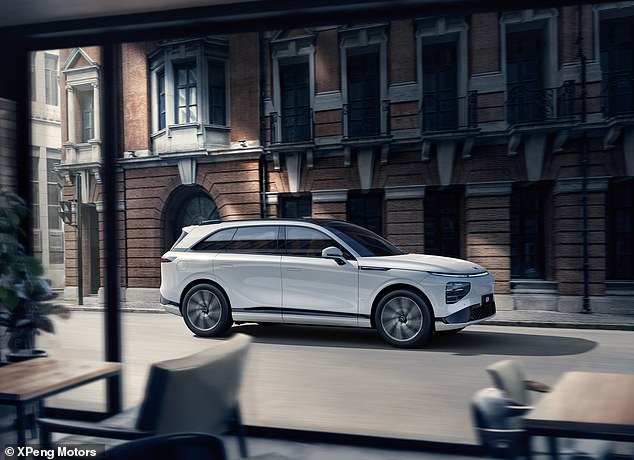 With the battery fully replenished to 100%, Xpeng range-topping models will be able to go for over 350 miles before you would need to go hunting for another chargepoint 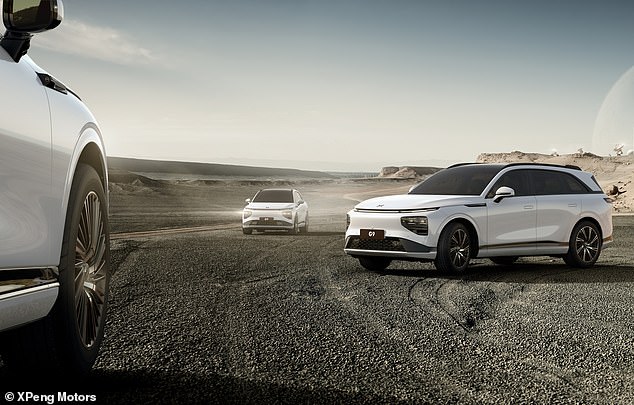 The SUV also boasts fully-adjustable air suspension, meaning it can be raised and lowered in ride height by 10cm, in case customers might want to venture off-road 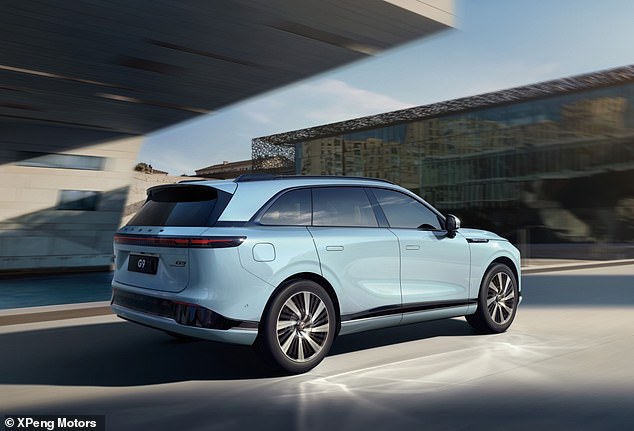 At 4.9-metres long and 1.9-metres wide, is almost as large as the new Range Rover, meaning it should have plenty of road presence.

Inside, the cabin is plush and clutter-free with two screens, one acting as the driver’s instrument panel and the second – much larger display – the infotainment touchscreen.

The driver and their passengers will be able to activate different features and adjust settings via a voice assist feature that is tuned to respond to up to 600 commands made from any seat in the cabin.

In terms of practicality, the five seater’s boot offers 660 litres of space, which is 74 litres more than a Skoda Enyaq but around 195 litres less than a Tesla Model Y.

Fold the rear backrests down and the total loading space is increased to a van-like 1576 litres. 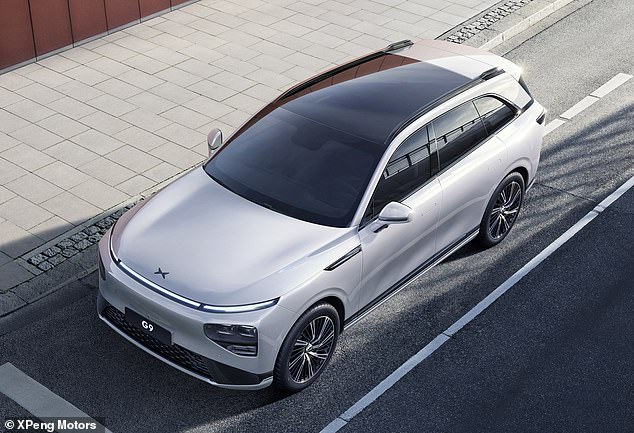 The most potent combination available will send an impressive 543bhp to all four wheels, meaning it is capable of sprinting from a standstill to 62mph in less than four seconds 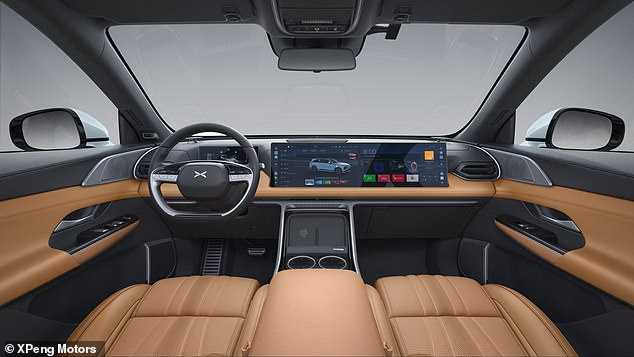 Inside, the cabin is plush and clutter-free with two screens, one acting as the driver’s instrument panel and the second – much larger display – the infotainment touchscreen 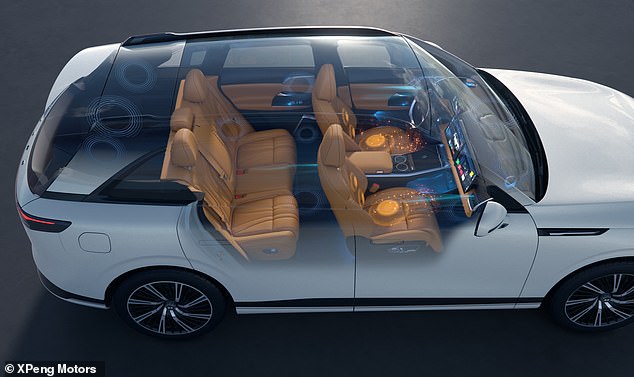 In terms of practicality, the boot offers 660 litres of space, which is 74 litres more than a Skoda Enyaq but around 195 litres less than a Tesla Model Y

It also gets a full suite of advanced driver assistance features, which are powered by a next-generation chip that’s claimed to be able to carry out a trillion operations per second.

This works in unison with a lidar system linked to 31 sensors and a forward-facing camera to detect pedestrian, cyclists and other obstructions up ahead and automatically brake the car to mitigate accidents.

The lidar also powers the G9’s self-driving features, with semi-autonomous vehicles already legal in some parts of China. From 2023, most cities in the country are expected to have legislation in place to allow for self-driving vehicles.

He adds: ‘This is topped off with a dual-chamber air suspension system and a luxurious smart cabin that includes a ground-breaking 5D music experience we call Xopera.

‘G9 is a fusion of many technical innovations woven together into an elegant design and marks a significant milestone after eight years of dedication.

‘We believe it will become the new benchmark for smart EVs, representing the last step before the realization of truly autonomous vehicles,’ 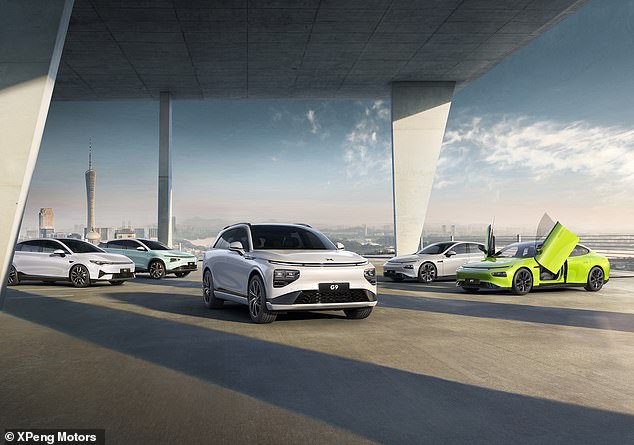 Xpeng cars are already sold in parts of Europe, though mainly Scandinavia. Countries where its models are available include Norway, Denmark, Sweden and the Netherlands 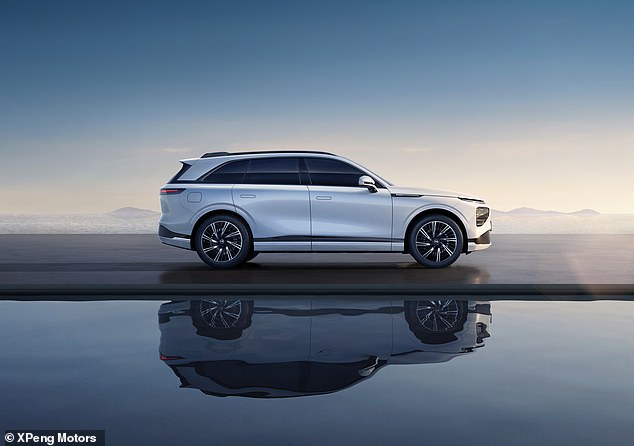 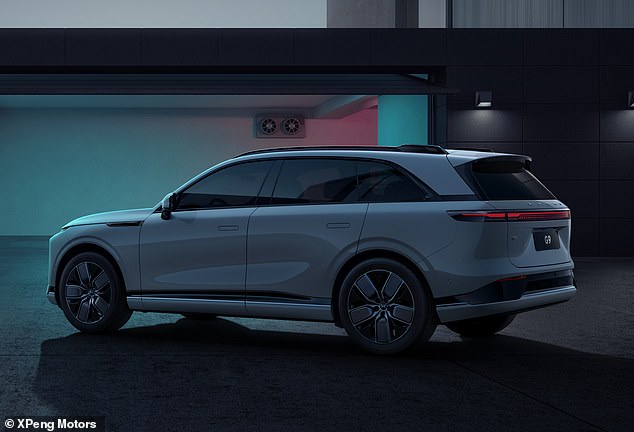 The company has recently said it aim is to be selling EVs in the UK within three years, so around 2025

It will later be made available in European markets where Xpeng is already selling cars – this includes Norway, Denmark, Sweden and the Netherlands.

The company has recently said it aim is to be selling EVs in the UK within three years, so around 2025 and will likely have pop-up showrooms, like its Westfield store recently opened in Holland.

Want to know about other manufacturers you’ve likely never heard of that are likely to break into the UK market? Here’s ten new electric car brands we might see on our roads very soon.

Some links in this article may be affiliate links. If you click on them we may earn a small commission. That helps us fund This Is Money, and keep it free to use. We do not write articles to promote products. We do not allow any commercial relationship to affect our editorial independence.